Ever noticed that white Toyotas, when viewed from the front, look like storm trooper helmets?
Posted by Kate Tompkins at 6:51 AM No comments: 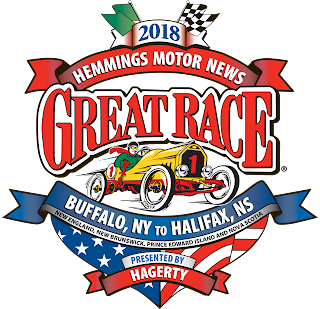 This summer, several vintage and classic cars (150 are currently signed up) will be driving from Buffalo, New York, to Halifax, Nova Scotia, via Vermont, New Hampshire, Maine and New Brunswick, in this year’s version of the Hemmings Motor News Great Race. Sounds like serious fun for the competitors, and anyone lucky enough to be living on their route.

The race starts at 10 am, Saturday, June 23, at the Buffalo Transportation Museum, and members of the public are welcome to come and see them off. From there, they’ll be driving through the New England states and the Maritimes, to arrive at the Waterfront Warehouse in Halifax on July 1. You can check out this year’s route HERE and the list of cars and drivers HERE. The winning rally team gets a $50,000 cheque, but I doubt that’s why anyone participates.

The Great Race started back in the 1980s as a race across the United States for vintage cars, but is now open to classic cars as well, and has a somewhat shorter route, which changes from year to year. Among the cars slated for this year’s run are some Ford Model As, a Hudson Pikes Peak Climber, an Auburn Phaeton, an American LaFrance Speedster, and a Peerless Green Dragon.

Check out this highlights video from last year’s race to get a taste of the experience for yourself. 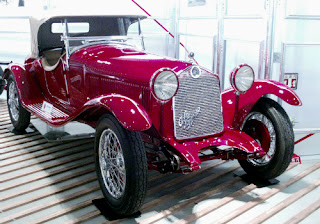 Although spring is several weeks behind this year, it’s time to break out the toys. Members of Club Alfa Romeo de Montreal (CARM), Club Fiat Montreal, Fiat-Alfa Romeo Quebec (FARQ), Ferrari Club of America (Quebec Chapter), Vintage European Automobiles (VEA) and their invited guests can join in this treasure hunt rally, starting at Des Sources Alfa Romeo at 10 am. For more details, check out this link.

I hope to get started putting together May's upcoming events this week. If you're running one, let me know.
Posted by Kate Tompkins at 9:00 AM 2 comments:

Love vintage campers or sleeper trains, or just looking for a camping fix in February? You might want to check into BaseCamp at Bonn, Germany. This “young hostel” has several campers (including 2 Airstreams, and 2 VW minibuses) and 2 original night sleeper trains, all sheltered in a former warehouse. There’s even a tent perched atop a Trabant. Bed and breakfast are included—the price varies with the rooms. There are also areas for socializing, a food truck and beer garden just outside, and places to get snacks and drinks inside. Looks like a great place for groups, or people who like people. Otherwise things are a bit cheek by jowl and I expect it could be quite noisy. You can check out the reviews on Trip Adviser if you want to stay.

Each trailer has its own theme, put together by German television and film set designer Marion Seul. Among them are Brit-themed Big Ben, the Houseboat, the Hunter’s Hut (popular among the videos I checked out), and the Space Shuttle. Each has been decorated inside and out—there’s a seating area in front of each camper.

Here’s a tour (in English) by someone who stayed there. It’s a bit long, but let’s you see many of the trailers from the outside, the eating facilities, and the inside of one of the sleepers.


And here’s a quick overview of the site in German.

The September car show list is up. You can find a link on the right of this page.

Still can't believe summer's almost over. It feels like it's barely started, but that nip in the air--in August??!!??--can't mean anything good.
Posted by Kate Tompkins at 2:11 PM No comments:

The second thunderstorm of the day is rumbling off into the distance. That means it will be nice this weekend, right? Or at least by Sunday, which, apart from the Week-End des Anciennes de Rimouski, is when this month's shows seem to start. That includes this Sunday's 7th Annual Baie-D’Urfe Vintage Car and Truck Show.

June was pretty much a wash-out weather wise. Here's hoping July will be better. If you're needing a car show fix, there's lots going on in the next few days, from drag racing at Mont-Joli (starts tonight and runs all weekend), vintage racing at Mont-Tremblant, and, a bit closer to home, the Hudson car show on Saturday. Details can be found in the July car show listing link on the right side of this page.
Posted by Kate Tompkins at 6:40 AM No comments: