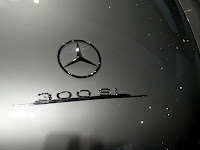 We rejoin our regularly scheduled programming. No, the Focus Exhibit at the Samsung Transportation Museum has nothing to do with Fords. According to the museum website, it’s meant to be a place where “the public can enjoy some of the most outstanding automobiles in history.” Oh yeah!

Ever since I started writing about classic cars a few years ago, I’ve been keeping a mental list of cars I want to see in person—kind of like a birder’s “life list.” Well, the Focus Exhibit had my number one car. I got more than a little excited when I rounded the corner in the lobby and caught sight of this 1955 Mercedes-Benz 300SL Gull Wing Coupe. Wow.

At that point it wouldn’t have mattered if there were no other cars to see in the whole museum. I stared at the gull wing for several minutes, before remembering that I was supposed to be taking pictures.

Of course, it was also at that point that my camera decided it didn’t like the lighting conditions and didn’t have enough batteries left for flash. Fortunately I did have back-up in the form of my video camera, which will shoot stills. It’s a lot less fussy about lighting, but the resolution’s also not as high. Which is why the pictures I shot in the lobby are better than the ones taken elsewhere in the museum.

The first thing I noticed about the 300SL coupe was how small and low to the ground it was. I’d seen an SLS AMG at the Montreal Auto Show last year (another gorgeous car) and don’t remember it being tiny, so this surprised me. The second thing I noticed was the plaid upholstery on the seats. Looks worn, so I’m assuming it’s original.

The 300SL roadster was sleek and beautiful, too, and in my favourite car colour, which is red. I still like the coupe better, but if someone offered me a ride in the roadster, I wouldn’t say no.

Posted by Kate Tompkins at 2:12 PM