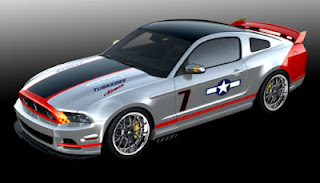 Mustang fans will have a chance to bid on a one-of-a-kind aviation themed Mustang at this year’s EAA (Experimental Aircraft Association) AirVenture aviation celebration in Oshkosh, Wisconsin. The “Red Tails Edition” Mustang has been provided by Ford to raise funds for the EAA’s Young Eagles Program. Last year’s offering by Ford, the “Blue Angels” Mustang, raised $400,000.

The Red Tails Mustang is meant to honour the Tuskegee Airman, the US Army Air Corps’s first African American aviators, and the P-51 Mustangs that they flew in World War II. It sports VIN #00051. The exterior is painted in polished aluminum and silver chrome, with red and yellow accents. Unfortunately the graphic that came with the press release appears to be a drawing rather than the finished car, but still gives a good idea of its appearance.

The Red Tail will be on display at EAA AirVenture July 23 through 29—the actual auction is on the 26th. More information on the auction can be found at www.airventure.org/gathering.