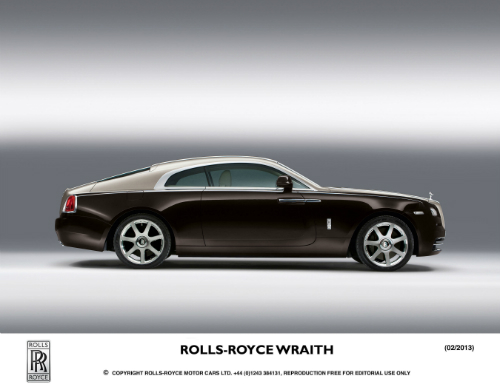 While I have a lot of respect for Rolls-Royce as the grande dame of the grand touring cars, I’ve always found them old-fashioned, and even a bit stodgy. No more. Judging by photos of the new Wraith launched at the Geneva Motor Show on Monday, they’ve definitely entered the 21st century. The Wraith certainly looks like it can perform, and the specs would seem to bear that out. Its V12 engine can put out 624 bhp and it will go from 0-60 mph in 4.4 seconds, making it the most powerful Rolls ever. Impressive for a high-end luxury car, which is why I’m wondering if they’ve taken a leaf out of Bentley’s book.

And it definitely is a luxury car, with a lot of hand-craftmanship involved. The interior is swathed in fine leather and wood panelling. The headliner has fibre-optic lamps incorporated into it so that it looks like a night sky. There’s lots of modern technology included, of course, including Satellite Aided Transmission which peeks ahead using the GPS data to pre-select gears based on upcoming terrain. Voice activation is said to be so sophisticated that it can understand a command such as “navigate to Piccadilly in London.” My GPS has trouble with “enter destination.”

The Wraith will cost around €245,000 in Europe and the first ones are expected to be delivered in the last quarter of this year. You can see more photos and information on the Rolls-Royce Facebook page (is it just me, or does it seem wrong that something as exclusive as a Rolls is on Facebook?). Obviously far beyond my budget, but I’ll be making room for it in my virtual garage.